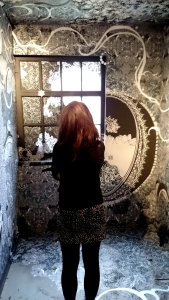 To underline,
to outline.

My drawings focus on graphic and pictorial motives. I mainly think and draw in patterns and structures, but am also influenced by animals, symbols and organic and floral ornaments. Hatchings, lines and dots connect elements, create depth and create new images. Details and new textures become a projection ground for new associations – letting the viewer connect what he sees with he knows. Drawing from an archive of repetitive patterns, I use them as a vocabulary to talk about the space they create and inhabit, to create a place where a story might have happened, an almost tangible echo of stories. I am also interested in the human body as a site to respond to: to see more of my Tattoo-Art, click here.

To rearticulate,
to resonate,
to remember.